This Week in Glitterati History 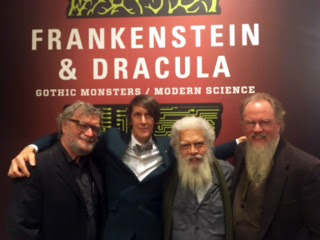 I attended two local literary events here in Philadelphia this week. Not bad, eh? The first was the premier of the SFWA-sponsored reading series Galactic Philadelphia, held Tuesday in the fireplace room of the Irish Pub.

Reading were Gardner Dozois and Lara Elena Donnelly. A pretty high-powered crowd of people showed up, including Lawrence Schoen, Gregory Frost, Samuel R. Delany, and Sally Grotta. Plus, of course, the proverbial others. 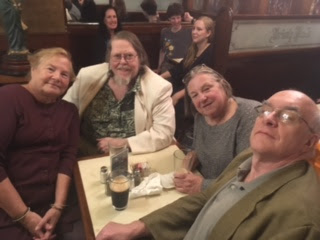 Pictured above are (l-r): Marianne Porter, Gardner Dozois, Susan McAninley and Frank Crean. Sitting about, talking, before the event began.

Both readings were very well received indeed. The crowd was warm and friendly and the atmosphere was notably gemutlich. Bill West took a terrific shot of the crowd smiling in appreciation of Gardner's reading which Delany posted on Facebook. I don't snipe people's FB photos. But if you use Facebook, you can find it there. 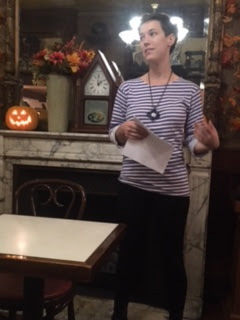 Pictured above: Lara Elena Donnelly. The photo, I hope, hints at her quite excellent stage presence.

So the evening was a complete success. 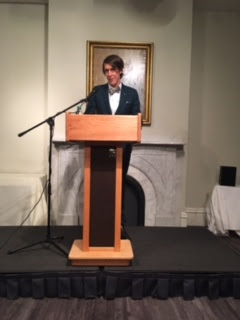 Equally good, as far as I'm concerned, was Henry Wessells' lecture on Mary Shelly and Frankenstein at the Rosenbach Museum and Library.  The Rosenbach has a fabled collection of rare books and manuscripts, and is currently celebrating the centenary of the writing of both Frankenstein and Dracula with a small but stunning display of related materials. I don't know about you, but having the opportunity to read from some of the original manuscript pages of Frankenstein: or the New Prometheus, and see the changes and corrections that Mary Shelly made as she was writing it, fto follow the workings of that brilliant mind, illed me with wonder.

I won't give you the Cliff Notes version of Henry's lecture. (Henry is a bookman and works for James Cummins, Bookseller; he once handed me a Shakespeare Second Folia; he really does know his stuff.) Other than to say that he holds to the belief that Frankenstein was the first science fiction novel and that he took the presence of two doubters in the audience (me and Chip Delany, though for different reasons) with grace and good humor. And that it was very well received by the audience. And that he provided those present with a great literary trivia question:What were the first words spoken by the Creature in the novel?

That's Henry up above.

The lecture was part of a series of events scheduled to support the exhibit, arranged by Edward G. Pettit, the Manager of Public Programs for the Rosenbach. Best known locally as "the Philly Poe Guy." The man knows pretty much everything about Gothic literature.

So the evening was a success. How big a success? When we got home, Marianne and I went onto the Rosenbach website and bought memberships.

The first words the Creature says in the novel are, "Forgive this intrusion."