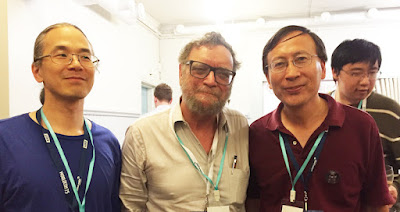 Chinese science fiction writers, editors, and other professionals were all over Worldcon 75. I had a number of conversations with old friends and new throughout the convention. Many of which occurred during the Storycom party on Saturday night.

I met and talked with any number of writers there, including Gu Shu, whose story "Chimera," appeared last year in Clarkesworld and Bao Shu,  another Clarkesworld alumnus, whose story "What Has Passed Shall in Kinder Light Appear" was published last year in F&SF and reprinted in Paula Guran's The Year's Best Science Fiction and Fantasy Novellas and Allan Kanter's The Year's Top Short Science Fiction Novels audio book. I also had the opportunity to connect with author Ruhan Zhao and to meet Feng Zhang, introduced to me as "the Chinese John Clute." Among, as they say, many others.

The conversations were good. I learned a lot about the rapidly evolving state of science fiction in China. My friend  Haihong Zhao and I discussed Cixin Liu's Three Body Problem  trilogy at some length -- books which we both admire greatly. I learned much that should prove useful to know.

And if I could share with you only one thing I learned about the Chinese SF community, what would it be? Well...

"You guys are all so supportive of each other!" an actress I know once remarked about the science fiction community in the US. "Actors aren't like that at all."

The Chinese science fiction community is like that too, and possibly more so, because contemporary science fiction is relatively new and needs all the support it can get. I had heard beforewhat a close-knit community it is. But now I could see it in action: in the way they treated each other, in how the bigger-name writers were careful to introduce the newer ones, and how everybody was careful not to hog too much of any conversation. These are good people and they're working to create an important body of literature. I couldn't help thinking the world of them.


Above: Ted Chiang, me, and Ruhan Zhao.  In the background is Bao Shu. Photograph by Haihong Zhao. Did I mention what a terrific writer Haihong is?


Posted by Michael Swanwick at 3:08 PM