The World Is So Full Of A Number Of Things... 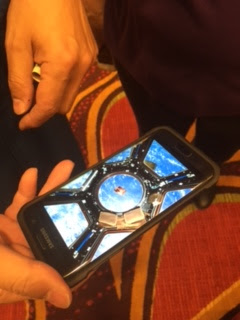 I'm working on the final draft of my novel, going up and down the pages looking for typos and infelicities of phrasing or thought. Which is why I have been so terribly remiss in keeping this blog updated.

Meanwhile, life goes on. So I have a more than a week's worth  of news for you. As ensue:

admirable of all writers' organizations, one that doesn't distinguish between genres and mainstream) for their podcast -- or Oddcast, as they call it.

As a rule, I cannot bring myself to listen to listen to my own interviews. But Marianne and Sean say that it came out well. Certainly, there was a great deal of fun and laughter. Because -- and here's a dark secret that no one else will tell you -- most writers are fun-loving, upbeat people. Shh!

At the end of the interview, I was challenged to present my hosts with two truths and one lie and let them guess which was the untruth. Did I fool them? There's only one way to find out.

You can find the Liars Club Oddcast main page here, which let's you choose iTunes or Stitcher or iHeart Radio as options for listening.

Amazon has selected The Iron Dragon's Daughter as a Kindle Monthly Deal throughout June. The ebook will be downpriced to 1.99 at Amazon.com for the entire month,  With so many ebook sales being one-day pop-ups, this is a surprisingly generous deal.

So... much praise to Open Road Media for arranging this.

I have been invited to the Fourth China International SF Conference in Chengdu, Sechuan Province, China this coming 10th-12th of November..

I accepted, of course. I love China, I love Chengdu, and this is a very exciting time for Chinese science fiction. Also, and best of all, I'll get to see some of my Chinese friends again. So this was an extremely easy decision to make.

I'll almost certainly be blogging from Chengdu when the time comes.

Not everything, mirabile dictu, is about me. When I was at the Nebula Awards Weekend in Pittsburgh, I snapped the above shot. 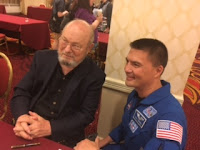 This requires a little context. The guest speaker for the awards banquet was astronaut Dr. Kjell Lindgrin. During the signing event, I was standing by Joe Haldeman's table, talking with his wife Gay when Kjell came up with his phone in his hand and the above picture loaded into it. While he was waiting his turn to show the picture to Joe, he explained what it was and, very quickly, I asked if I could take a snap.

What you see above you is a copy of The Forever War afloat inside the International Space Station.


And that's all for this week. There'll be more news soon. And, knock on wood, more often.


Above: See how casually that's held. What a wondrous time in which we live!

You were a magnificent collaborator/interviewee for the Oddcast, for which I thank you (they all thank you). It was a smart, clever, laugh-out-loud interview, and that isn't always the case.

Given that you have published a fair few books in your day (of which it continues to be) and you are privy to the wants and whims of book publishing and everything that entails, do you by chance have a guesstimation for when you think Iron Dragon's Mother will be on the shelves?
I have been waiting since Dragons of Babel for said book and any professional soothsaying and\or prognosticating will be taken with a single cube of salt, but eagerly none-the-less.
Thank you in advance!

I'm sorry it's been such a long wait -- but it wasn't until a couple of years ago that I finally found an idea for the third (and final) book set in Industrialized Faerie. The imagination is a horse and though I've learned to ride it, I've yet to discover how to make it go where I tell it.

I should be turning the manuscript over to my agent next week. Then there'll be negotiations, followed by a sale. After which, the publishing house will decide where in it's schedule to place it. Some times of year are better for commercial novels and others for novels they don't expect to be particularly commercial. And of course they want to have a steady mix of SF and fantasy, upbeat and downbeat, etc. etc., et. After which, the book goes into production and this can be a very slow process.

Almost certainly, sometime next year. I wish it were sooner. But these matters are not in the hands of the author.

i like this page
At the end of the interview, I was challenged to present my hosts with two truths and one lie and let them guess which was the untruth. Did I fool them? There's only one way to find out.
thanks you for sharing :D
gclub casino
golden slot mobile
gclub