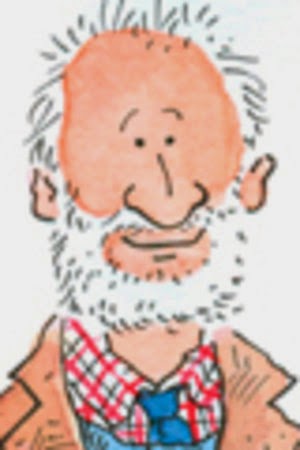 Tony Auth died the other day.  He was the Philadelphia Inquirer's editorial cartoonist for decades, and his angriest cartoons could draw blood.  During the Watergate mess, he drew a cartoon of the White House as a brothel with Nixon as the madam, watching sadly as some of her whores are led into a paddy wagon.

But he also had a lovely sense of whimsy.  Nobody did gentle and happy better than him.  Behind the register at Joseph Fox Bookshop (the last of the great old independent bookstores in Philadelphia), you can see the envelopes tacked up of his correspondence with the bookshop, each with a delightful color drawing on it, of anthropomorphic foxes and the like.  You could tell just by looking at his work that he loved to draw.

Auth illustrated a number of children's books, and for a time drew a daily comic strip written by Daniel Pinkwater.  It was a brilliant piece of work, filled with joy and adventure.  Alas, the market for comic pulp adventure is limited in this time and place, and Norb did not last long.  The cartoons were collected in a single large paperback volume, shoddily bound.  I just now took a look on Amazon and see that you can buy a copy for as little as one hundred dollars.

I never met the guy but I do have one of his watercolors, bought cheap at an estate sale.  Still, I'm going to miss his drawings.  What a clean, open, accomplished line he had!  We're all the poorer for his going.

Not only that, he was a Mini-Cooper owner, bought one of the first to show up here. So clearly he was a genius.

It hurts to hear that Tony Auth is gone. He had a great science-fictional eye. During the time that SDI was very much in the news he drew cartoons featuring particle beam zap guns and pulpish orbital laser weapon stations that were just delightful. And, boy, when he speared a pol, they were SPEARED. He deserves to be long remembered.