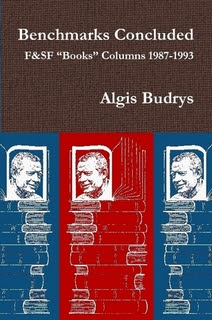 The industrious David Langford has just published the final collection of Algis Budrys's book reviews.  There are three volumes currently available:  Benchmarks Continued, Benchmarks Revisited, and Benchmarks Concluded.  I don't know if there were any prior volumes or if these are the complete set, but in any case, Budrys's criticism is well worth reading.

I remember that when I started out in science fiction,  my then agent Virginia Kidd told me never to review books.  "Every negative review will make you an enemy," she said, "and a fiction writer doesn't need that."  Budrys, however, was fearless.  If he didn't like a book, his review would blister paint and flay skin.

"Pray that you never receive a review like this," Gardner Dozois told me one day and showed me the job that Budrys had done on . . . well, never mind who.  He wouldn't thank me for bringing up such a painful memory.

Inevitably, of course, Budrys did give me a review like that.  Believe it or not, I forget what novel it was for and, believe it or not, I wasn't upset -- not because I don't have a thin skin, like every other writer I know, but because my book was just an excuse for an attack on something he disliked about New York publishing at the time.

As a critic Budrys was simply brilliant -- though, as I've implied, some of his take-downs were as unfair as they were unkind.  But, of course, that only made them all that much more entertaining to read.  Provided, of course, that they weren't of your work.

Late in his life, Budrys created his own science fiction magazine, Tomorrow Speculative Fiction.  I vividly remember stopping by his table in the huckster room of some Worldcon or other and having him slam down a freebie copy of the magazine in front of me with a scowl and then snarl, "Submit a story to me!" in a way that suggested that a lot of writers wouldn't.  So I guess Virginia's advice was right.

You can find the Ansible Editions lineup here.

I'm really glad you gave Budrys this shout-out here. The guy should not be forgotten.

He WAS a brilliant critic or reviewer at times. When I was a kid reading the reviews he wrote for Fred Pohl's GALAXY in the 1960s, he communicated to me a vision of a Platonic ideal of American magazine SF, that the reality -- alas -- has infrequently lived up to.

It's an even higher level of performance than his later F&SF reviews, I'd say, possibly helped by the fact that in the 1960s Budrys -- and we in his company -- were coming into initial critical contact with the first publications of F. Herbert's DUNE, R. Heinlein's THE MOON IS A HARSH MISTRESS, early Delany and Zelazny, DANGEROUS VISIONS, Lafferty's PAST MASTER,J. G. Ballard, and, in general, rather more of a weightier level of work by sf writers -- and, by God, they were writers of SF, not fantasy -- than we see today.

Because it _was_ the 1960s and things were somewhat more free, Budrys also reviewed things like the 1968 Chicago convention/riots --in the process, becoming the first person to broach the possibility of bioterrorism that I know of -- and the first Apollo Moon-landing, as well as novels by the likes of Robert Coover (!).

I've got the original (non-Dave Langford) book and I recently picked up the second (the first that Langford put out) and I'm glad to see the third. Wonderful stuff.

Many thanks for the mention!