Two Thirds (Almost!) of a Century and Counting! 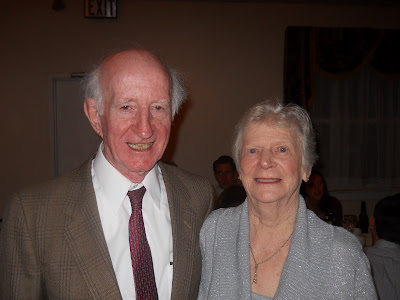 Saturday I went to a celebration of the 65th wedding anniversary of my neighbors Albert and Enid.  Sixty-five years!  That's an accomplishment I dearly hope to emulate.

Of course, it helps if you marry young (as I did not, quite) and choose your soulmate right off the bat, as Al and I both did.

Albert started the war as a mechanic for the RAF.  At that time, only gentlemen were allowed inside the warplanes, and he was an East Ender.  The mortality rate among gentlemen was high, however, and by war's end he was the navigator in a bomber.  Enid was a radio operator.  She invaded France two days after D-Day.

They'd both tell you that they're ordinary people, and in a sense that's perfectly true.  It was ordinary people like them and my father who defeated the Nazis and saved civilization.  For which I will always be grateful.

It was a terrific celebration with all the children and grandchildren and great-grandchildren present, as well as lots and lots of friends.  A room thronged with people who all liked each other.  Marianne and I felt privileged to be there.

Oh, and did I mention that they're the best neighbors in the world?  They are.  Literally.