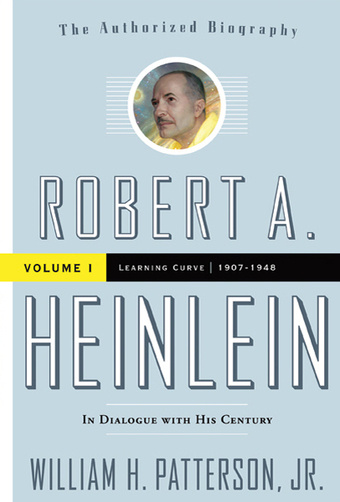 I've got things to do, ephemera to write, a book to promote, and promises to keep before I can sleep.  Much less get back to writing fiction anytime soon, dammit.

So of course any reading that is not to the immediate point is wasted time.

I've been wasting time rereading William H. Patterson, Jr.'s biography of Robert A. Heinlein.  Or, rather, volume one of his biography -- there will be more, and this one only gets him a few years beyond WWII.  It's a book that makes me like Heinlein the man a lot more than I expected it would.  Behind the rather starchy, aphorism-spouting facade was an interesting and quirky fellow who was knocked flat by life several times in his early years and always got back up and re-entered the fray with genuine zest.

It's a pity that Heinlein so carefully pruned his past, burned his letters, destroyed every trace of himself that ran contrary to his carefully-constructed public image.  Because every indication of fallibility,  every suggestion of human weakness needing to be overcome, every agonized cry of "What the hell does Campbell want?" just made me like him the more.

Those of you who are planning to be culturally significant might want to keep this in mind.

But if I may, I'd like to call Patterson to task for a sentence in which he says that Heinlein repackaged Jack Woodford's writing advice when he wrote "On the Writing of Speculative Fiction," which includes his famous rules:

All of which, save for number 3 are gospel truth.  And even that one is only wrong in a nuanced way.

His second career was as a writer of how-to-write books.  Trial and Error was a major hit, and Heinlein learned a great deal from it.  Chiefly, that writing is a business and that the way to succeed at it is to treat it as such.

I read Woodford back when I was an aspiring writer and years away from being publishable, and I'm here to tell you that his advice (except for that which was badly dated and so obviously so it wasn't a problem) was good.

What Heinlein did was to take the gist of Woodford's advice, run it through the smithy of his soul, and come up with something new.

I admire both men, and I have enormous reservations about each.  But credit where credit is due.  Heinlein's essay was far more than a repackaging of Woodford.

So I must take exception to that particular sentence.

The rest of the book, however is excellent.


And just in case you're thinking of looking up Woodford's work . . .

Be forewarned.  Woodford became rather a crank as he continued to pen writing advice books.  More and more space was devoted to rants about Communists, Catholics, feminists, "fags" and the like.  If you look into his books (and parts of them are excellent) you should be prepared to be offended.

Jack Woodford is dead now, and I must ask you to be gentle with his memory.  He had a hard life.  His relations with the daughter he adored were not good, and he died in a mental asylum outside of Williamsburg, all but forgotten.  Let us remember the good he did and the enormous help he was to young Bob Heinlein.  His prejudices died with his body.

OK -- I can live with this. What you said about running the gist of Woodford's Trial and Error through the smithy of his own experience and personality is spot on, much more accurate than I phrased it.

Unfortunately the corrections and revisions for the trade paper edition of volume 1 have already been locked. Else I would hasten to get this one in too.

Don't know why "Fred" crept in there. This is Bill Patterson, bill@williamhpattersonjr.com