My Night With Jeffrey Dahmer 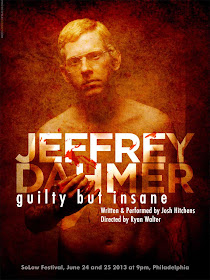 "I've had sex with over a hundred men and only killed seventeen of them.  That should count for something."


I spent Wednesday night in a dark, hot, filthy, basement-like garage listening to Jeffrey Dahmer talk about his life.

Okay, it was actually actor Josh Hitchens performing his one man play Jeffrey Dahmer: Guilty But Insane.  But oh my God, it was mesmerizing.  I know because twice I managed to look away from Hitchens in order to glance at the audience and they were motionless, stunned, rapt.

The first thing that has to be said is that no, the piece was neither exploitative or gross.  Hitchens's impersonation of a man who killed human beings, ate their hearts, and kept their skulls as trophies is both moving and horrific.  None of it is played for visceral kicks.  his Dahmer is a very human monster, in part appalling and in part sympathetic.

The other thing that has to be said is that though "Dahmer" tells you up front that there will be no explanations, this narrative (taken from his confession, courtroom testimony, and subsequent interviews) provides as close to an explanation of his behavior as we're going to get.  All the experts who examined Dahmer declared him sane, prompting a headline that read:  HOW MANY PEOPLE DO YOU HAVE TO KILL AND EAT TO BE CONSIDERED INSANE IN MILWAUKEE?  But in a court case, "sanity" is a legal term meaning "able to distinguish between right and wrong."  Which Dahmer could.  He was, however, acting under compulsions that made him do things he knew were wrong.

This is a terrific piece of theater, written by Hitchens, and made up almost entirely of Dahmer's own unparaphrased words, stitched together from his confession, the trial transcript, and interviews after the fact.  I'll go to see Hitchens in pretty much anything -- he's that good -- but I think this may be his best work to date.